Can Chelsea take one step closer to the title?

Jose Mourinho’s side also have a game in hand over their closest rivals, and with just nine games remaining in the 2014/2015 Premier League season, the title is Chelsea’s to lose. However, the Blues cannot afford to become complacent with the finishing line within touching distance, particularly with fixtures against Manchester United and Arsenal coming up in late April.

A trip to Hull may present a wonderful opportunity to secure another three points towards lifting the title in May, but it is never easy coming up against a team battling for their lives at the wrong of the table. Chelsea may have missed out on glory in the FA Cup, but victory at the KC Stadium would put the Blues one step closer towards a domestic double. 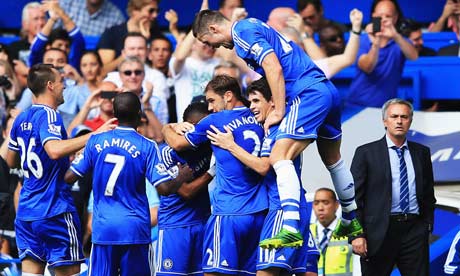 Strong finish
A run of eight league games unbeaten is a true sign of Chelsea’s character to bounce back from the dramatic 5-3 defeat on New Year’s Day at Tottenham, with a string of high quality performances putting Mourinho’s team ever closer to knocking Manchester City off their perch.

The draw against Southampton may be valued as a missed opportunity, but Chelsea have put themselves in a position where they are in control of their own destiny. Coming up against a team who are fighting for their lives carries the same level of danger as playing a potential title rival, and it will need a strong performance from Chelsea to get the job done.

It could be the perfect game for Diego Costa and Eden Hazard to show why they are the best attacking players in the Premier League this season, although John Terry and Gary Cahill may have to stand up strong to any long balls if Hull decide to go direct.

Troubled Tigers
Consecutive Premier League draws against fellow relegation-threatened sides Sunderland and Leicester have edged Hull further away from the danger zone, but Aston Villa’s uprise in form and Burnley’s surprise victory against Manchester City has narrowed the gap to just three points.

Steve Bruce will already be aware of the considerable task that lies ahead for his team in the next few week; coming up against Chelsea may be bad enough, but the Tigers then face Swansea, Southampton and Liverpool in what could be an incredibly difficult period when Hull hope that other results go in their favour.

Hull usually perform much better in front of their home fans, but they will have to rediscover their scoring touch in front of goal if they are to have any chance of causing a real upset against the Premier League leaders. Bruce could be boosted by the timely return of key players Mohamed Diame, Liam Rosenior and James Chelsea, although creative wingers Robert Brady and Robert Snodgrass remain on the sidelines during what could prove to be a long afternoon for Hull and their fans.